A Palawan trip is never complete without an island hopping tour. Originally, we planned on bumming on the shores of El Nido doing nothing but we wanted to see the famous karsts surrounding the islands, so we booked our island hopping tour with Northern Hope Tours few days prior to the trip.

We got the Tour A, which is composed of the Secret Beach, Schmizu Island, Small Lagoon, Big Lagoon and 7 Commandos Beach. Apparently, our guides changed plans with the latter and switched the 7 Commandos to Papaya Beach.

Our group is composed of a couple from Manila, another couple from Davao, a Russian lady named Juliet, a tall blonde guy, Joe, which we nicknamed Miley Cyrus (coz he was lying in the hammock in Papaya Beach like Miley’s “Wrecking Ball” video), two guys Rye and Kai whom we bonded over selfies on the rocks and waters for 7 hours in the open sea.

Since we have foreigners on board, our guide, Dexter, spoke English for the benefit of everyone. The guides are very accommodating to everyone. They even let Kareen place her camera inside their Aquamundo dry bag. (NOTE: Did I tell you that it’s the unofficial dry bag of El Nido? Almost every tourist and local carries Aquamundo for their stuff. Since we still have another island hopping tour in Puerto Princesa, Kareen bought a gray 5L Aquamundo dry bag for Php 700+ at the Art Cafe–which is sold cheaper compared to those sold at the tiangges). Still couldn’t get over that I didn’t get a red Aquamundo dry bag.

Let me go back to the tour, first stop is the Secret Beach. It is hidden in a small island reminiscent of the movie adaptation of Alex Garland’s book “The Beach”. It is surrounded by limestone karst cliffs with a lagoon in the middle. If it’s low tide, one can enter into a small hole where you will see a massive caldera that was once a cave which collapsed.

Next stop is Shimizu Island. We docked almost noon and the place is already crowded with outrigger boats and island hoppers. Dexter and the gang prepared delicious grilled fish, squid, pork and fruits for dessert. Tourists can laze around the beach, swim or snorkel. 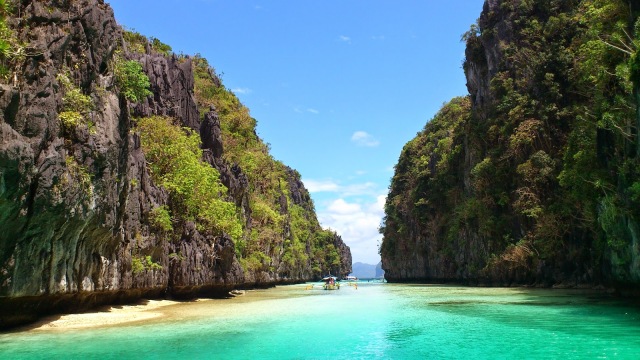 We have to brave the Pirates-of-the-Caribbean-like big waves just to get to the Big Lagoon. As we approached the lagoon, its beauty deserves a moment of silence. According to the guide, the only activity allowed in Big Lagoon is sightseeing. We are not allowed to swim or snorkel because it is the breeding ground for fishes and other marine life.

We proceed to the Small Lagoon, located on the cove of Miniloc Island. Since Kareen and I don’t know how to swim, we just made use of the 30 minutes hanging our wet sarongs and cover-ups and took selfies. I know, we missed 1/8 of our lives for not being able to swim and appreciate more of the Small Lagoon’s beauty. Moral lesson: must learn how to swim.

Last stop is Papaya Beach in lieu of 7 Commandos. Here we get to enjoy the sun and the beach. Coconuts are available at Php 50 at the only vendor in the island. Chips and coffee are also available beside the coconut vendor. Kai joined the other foreigners and locals for a game of volleyball while Rye, Kareen and I explored the rocks at the other side of the island. We left our bags with the Russian lady and informed our guides where we’re going to avoid being left behind.

We went back to the mainland around four-ish. Our boat stalled a few minutes and allowed the regatta to finish the race. We freshen up at Rye and Kai’s place in El Nido Bay Inn and went around the town. We met up with Josiah Sicad of Lakas.com.ph for a quiet dinner at Bacuit Bay Grill, Bar and Restaurant. Then we had an epic quest for an ice cream at 9pm. Unfortunately, most establishments sell their homemade ice cream at skyrocketing price. After an hour of walking, we ended up having watermelon and mango shakes at the Lonesome Carabao Lounge. The only place that sells an ice cream is the Midtown Bakery which is, to our dismay, closed.

Our insights: there is a market for ice cream and shower stalls in El Nido.

Read my other Palawan blog series:

There was an error retrieving images from Instagram. An attempt will be remade in a few minutes.